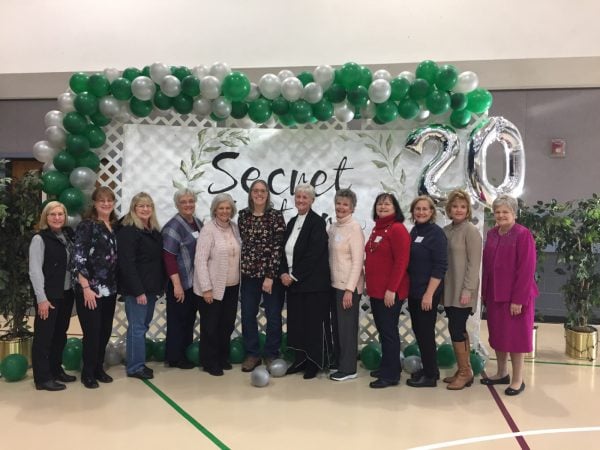 The Secret Sisters’ Ministry celebrated its 20-year anniversary at its annual luncheon on January 19th. To help commemorate this occasion, Kathy Sugg, Pastor Sugg’s wife and the prime mover in establishing the GBC Secret Sisters in 2000, was invited as a special guest to speak to the luncheon attendees.  Kathy traveled up from their Florida retirement home to speak about the positive influence church women can have on other women’s lives.  Her speech was well-received by all attendees:  43 Secret Sisters, and 36 guests and other GBC ladies.  Our celebration of fellowship occurred in GBC’s beautifully decorated Family Life Center where delicious food was consumed and touching testimonies were presented.
The luncheon provided the opportunity for Secret Sisters to reveal themselves and announce for whom they prayed in 2019.  Eleven Secret Sisters were recognized for their consecutive 5-, 10- and 20-year faithful participation and four Honorary Secret Sisters were introduced along with the 15 Prayer Warriors who prayed for those Honorary members.  Jane Benitz announced she was retiring from her volunteer Secret Sisters duties after 16 years of distributing the Secret Sisters’ Connection.  Caryn Glenn was recognized for her 20-years of Secret Sisters’ Ministry leadership, having taken over when Kathy relocated, with her husband, to Seattle, Washington in 2000. God wants us to pray for one another.  Through Him Secret Sisters have improved fellowship among our church family, have become more aware of others and their needs, and have uplifted each other through prayer.  With God’s continued blessing, we will have another successful year supporting each other through encouragement and prayer.
Posted in News